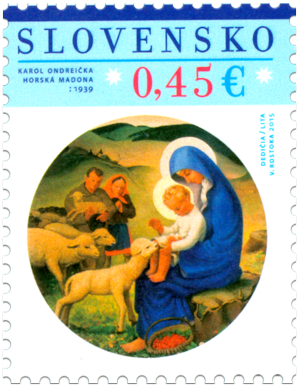 Karol Ondreička frequently devoted himself to the topic of the Madonna with Child in his works of art. There was probably no other Slovak artist in the first half of the 20th century who would have portrayed her with such a degree of varying creativity as he did. The first picture in the series, Madona slovenských hôr (Madonna of the Slovak Mountains) (1928) caused a stir in the Slovak cultural public since Ondreička succeeded in combining traditional Christian iconography with the typical Slovak mountain landscape where flocks of sheep graze under the supervision of shepherds and a wayside shrine or Calvary cross can be seen here and there in the background.
In 1930s and 1940s, this picture, now lost, was followed by numerous other variants – the author set the Virgin Mary with Child Jesus, painted in the style of late Gothic or early Quattrocento, into a mountain environment or sometimes directly into the centre of a forest, among shepherds, woodcutters and even climbers. In other pictures Ondreička dressed the Madonna in folk costumes of specific Slovak regions.
The concept of Horská Madona (Madonna from the Mountains) from 1939 apparently built on its famous predecessor, as if transferred from the 14th − 15th century altar pictures to the pasture of a submontane countryside. The Madonna receives a tribute from a young married couple who bring a symbolic “scapegoat” and another sheep of the herd is shown licking the bare knees of the Child Jesus. A basket of fresh forest strawberries stands in the foreground. Karol Ondreička employed iconographic principles to emphasize the intimacy, the humble familiarity of “a holy picture”.
Naturally, the motif of Madonna with Child is only loosely connected with the holyday of the Birth of Christ. However, the solely Christmas motif is expressed by a graphic ex libris, the Child of God opens his arms to accept His Mother or the entire world. He hovers over the snow-covered Slovak country and above a cloud that may let more snow fall. 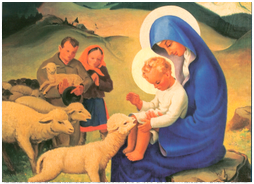 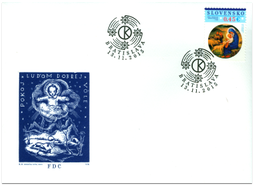 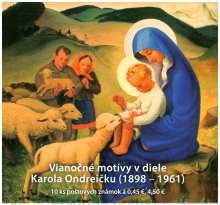 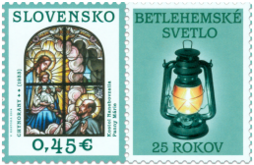