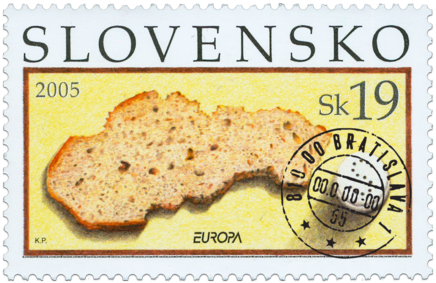 © Slovak Post., 2005 In dependence on the Slovak environment, vegetable and dairy products have traditionally constituted the preponderances of Slovak citizens’ diets. Meat originally did not play a significant role. Slovak food was characterised by its generally sour taste. Sweeter meals were consumed only occasionally. Considering the techniques used for the preparation of meals, boiled meals were preferred over roasts. Over the previous two centuries the development of Slovak food was influenced by the expansion of agricultural commodities such as potatoes, maize and sugar-beet, the enhanced milling of cereals, as well as increasing cross-border trade. Vegetable products, bread, cooked pasta, mashed vegetable and potato meals, soups, sauces and various kinds of cakes formed the basic components of Slovak citizens’ meals. Bread was always treated with respect. Welcoming noble guests with bread and salt represents one of the best-known Slovak customs. However, small dumplings made of potato and flour are the best-known and most typical ‘pasta’ cooked by the Slovak population. Cabbage, especially in sour and fermented forms, is the historically most used vegetable. Specific dairy products in Slovak food are made of ewes’ milk, whilst soft ewes’ milk cheese (bryndza), various smoked and cooked cheeses (oštiepok, parenica), and milk drinks (žinčica) are the best-known. With respect to alcoholic drinks, mead (medovina) represents one of the oldest kinds. Distilled spirits, made from plums and juniper berries, are characteristic for the Slovak nation. In its design, the stamp characterizes the basic food-stuff in the Slovak diet, bread with salt, which simultaneously represents the symbol of hospitality. Zora Valentová 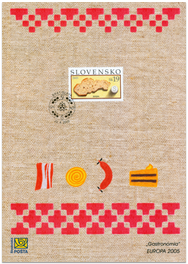 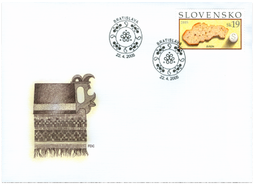