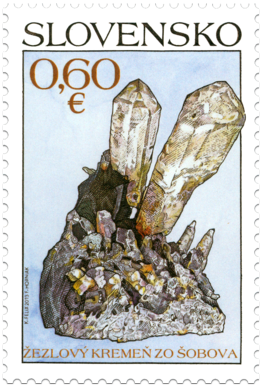 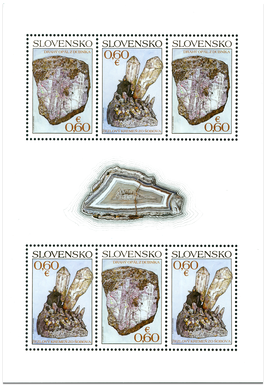 Quartz (SiO2) is one of the most common minerals in nature forming hexagonal columnar crystals finished with planes of trapezohedron or dipyramid. Crystal planes are frequently grooved.  The crystals can be found in a form of crystal twinning and other various deformations. However, this mineral usually has massive, granular or microcrystalline shape, and can be also found as amorphous. It can be of various colours, virtually covers the whole colour spectrum. Its streak is white.  Quartz is a transparent even translucent mineral with vitreous shine on a new surface. Plenty of its forms represent semiprecious stones, for instance: clear crystal quartz, rose quartz, violet amethyst, yellow citrine, smoky quartz, black morion, amorphous chalcedon variable in colour, agate and opal.
A so-called sceptre or dovecote quartz is a mineralogical curiosity from the vicinity of Banská Štiavnica. The crystals are joined together along the longest axis in such a way that their final shape reminds a sceptre or a dovecote (the bigger crystal is usually grown on the smaller one or vice-verse). It was studied by Giovanni Antonio Scopoli, Italian-Austrian natural scientist, professor of Mining Academy in Banská Štiavnica during 1769 – 1777. Even today, the most beautiful crystals are still located in fissures of quartzite stones on the hill Šobov situated north of the town, nonetheless they used to be also found together with other minerals in crystal fillings of cavities (so-called druses) in upper parts of ore veins in Banská Štiavnica and its surroundings. Sceptre amethysts – a thicker violet quartz grown on a thinner column of transparent stone – were likewise found in ore deposits.
On the gutter block is located a variety of quartz – agate from area of Kuzmice located in southern part of Slanské vrchy Hills in eastern Slovakia in the gutter. A druse of crystals of ore minerals (sphalerite, chalcopyrite, galena) with quartz and calcite from Banská Štiavnica is depicted on FDC. And a crystalline structure of euchroite – secondary arsenate of copper from Ľubietová, which is one of 19 Slovak minerals first found and noted down in Slovakia, represents a motif of the FDC cancellation. 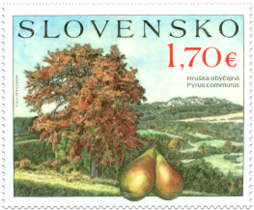 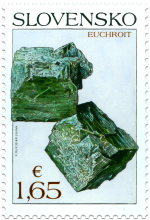 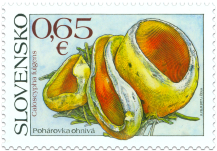 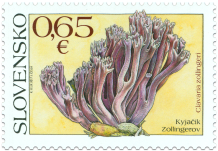