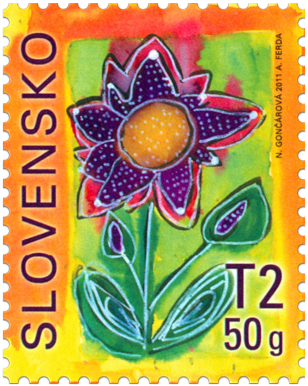 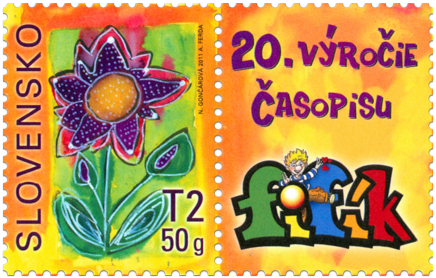 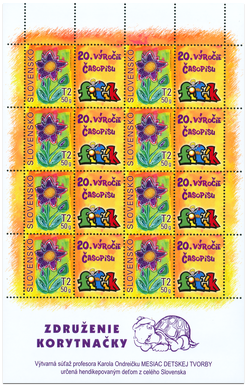 The artwork of the postage stamp originates from the national art competition MONTH OF CHILDREN’S CREATION conducted by professor Karol Ondreička. The competition’s topic I WILL DRAW A FLOWER CHILDREN’S STAMP was suggested by Martin Vančo. The national art competition is dedicated to both physically and mentally handicapped children regardless of age. The first chairman as well as co-founder of the competition was a prestigious Slovak artist, Professor Karol Ondreička. After his death, his office was taken over by Professor Dušan Kallay which he continues to hold. In 2010, the national competition included artwork by five thousand children from almost 400 special and integrated elementary schools, children’s homes, and welfare and re-educational institutions. Within twelve years of the competition’s existence, which started with the publication of children’s magazine Fifík as well as children’s Association Turtles, children have painted, drawn, modelled and embroidered nearly 70,000 works of art. They have created four mascots which represented our delegation of sportsmen at the Paralympic Games. The artwork has also decorated the corridors of the Cardiologic Centre in Bratislava, they have been published in many printed media as well as illustrations for a book of original children’s tales with the title Little Angel in Tall Grass, adapted by Slovak writers. The national competition holds a significant reputation and is supported by the SPP Foundation, Slovak Paralympics Committee, and the Capital City of Bratislava. Fifik magazine has been organising a children’s art jury in the form of the Bratislava Biennial of Illustrations. One of the jury members is also an author of artwork within the competition Month of Children’s Creation. The children’s jury (BIB) along with an international jury of artists bestows the Children’s Jury Prize which among Slovak artists was won by Peter Uchnár and Igor Piačka. These significant artwork activities of the children’s magazine FIFÍK enable children to present their talent nationwide as well as at the international level.
Magdaléna Gocníková 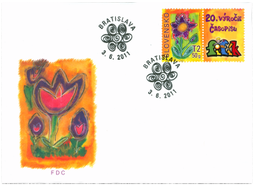 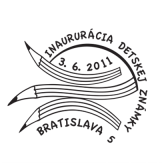 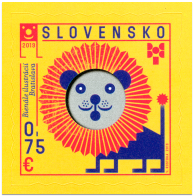 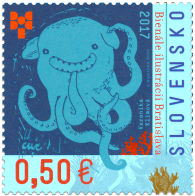