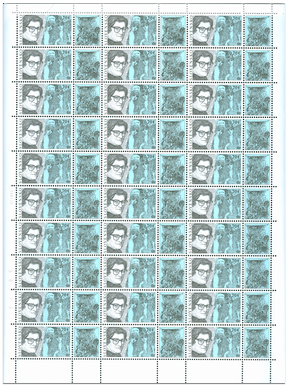 Karol Ondreička (1944 – 2003) a painter, a graphic, an illustrator, a postage stamp creator, a significant artist and a teacher, professor at Academy of Fine Arts and Design and at Faculty of Education of Comenius University in Bratislava. In 1989 – 1990 he was the Chancellor of the Academy of Fine Arts and Design. As the first pupil and member of the artistically strong Brunovský’s graphic school, in his artistic creation, Ondreička continued with the activity of Professor Albin Brunovský. His works are specific for rich imagination, marked drawing skills, redrawing of the details and using classical graphic techniques. These are known from his free graphics, numerous book illustrations, artistically strong exlibrises, paintings and finally also in his stamp creation which is the integral part of his life-long work.
In the last Czechoslovak stamp issues (1999 – Kriváň, 1992 – Western revolt) and other Slovak stamp issues, Ondreička presents himself as a skilled graphic with distinct hand writing and rich imagination. Creating the stamp devoted to the personality of Š. Banič – the inventor of the parachute – not only did Ondreička realistically depict the portrait of Banič, he also applied the period documents in the composition. The issue also shows romantic atmosphere of the beginning of the 20th century or a poetic expression of a parachute flight. He selected similar procedure in creating the stamp devoted to the personality of J. B. Magin. Odreička also introduces a new creative approach to interpret serious all-society topics by focusing on a more civilian and immediate personal expression. Suppressing of the pathos is shown in the interpretation of the subject of the memorial to the victims of the political processes when the author expresses gratitude in a form of a bunch of field flowers. It highlights informality and casualness but chiefly sincerity of his expression.
Ondreička dealt with the depiction of the historic legend during the times when Roman legions penetrated our territory in the issue Magic rain by the river Hron in an original way. He did not accept the famous antique depiction of the legend. According to Ondreička, rain pours from the sky, from the heaven depicted with God’s eye in accordance with the traditional Christian interpretation of this legend.
The issue together with the Easter stamp from 2002 represents marked illustrative line of the Slovak stamp graphic. Stamps of the author together with his graphic creation also show his ability to demonstrate magnificence of the poetic imagination on a rather small surface.
Antónia Paulinyová 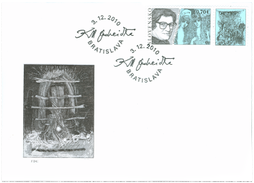 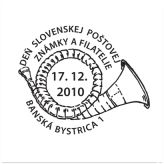 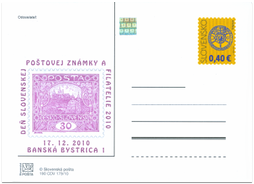 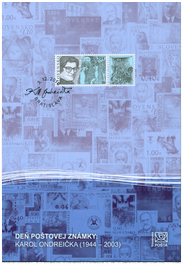