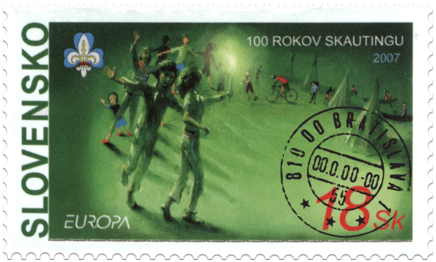 © Slovak Post, 2007 This August we will commemorate the centenary of the establishment of the World Organisation of the Scout Movement. Its founder, British General Robert S. S. Baden–Powell (1857 – 1941) drew his inspiration from the Anglo-Boer War in South Africa where young boys who were used to finding their way in the country were successfully used as scouts. After his return to the United Kingdom, Baden– Powell founded, in cooperation with Canadian writer and traveller E. Thompson-Seton, the movement focused on the young and their education, especially their relationship with nature. Also at present, scout groups mainly spend their time in the country, deal with nature conservation and pursue activities such as hiking, water rafting, etc. The first organisation in the Czech Republic called Junák - Český skaut (Czech Scout) was established in 1911 by founder A. B. Svojsík. Czech Scouts made their mark at the establishment of Czechoslovakia. At this time they operated a courier post for the newly-established state authorities in Prague. On this occasion, two courier stamps were issued, later with overprint, which represented the first scout stamps in the world (7 November 1918), i.e. before the Hradčany stamps. Scouting was banned by the totalitarian governments in Czechoslovakia in 1939, 1949, and 1971. It was re-established in 1990. Today, in its two organisations: WOSM – for boy scouts and girl scouts, and WAGGGS – for girl scouts only, world scouting unites more than 35 million global members (only Andorra and six countries with totalitarian regimes are not members). The representatives meet every four years at a World Scout Jamboree. Michal Z i k a – Bear 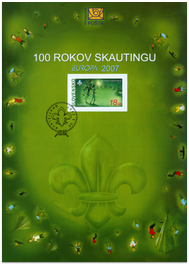 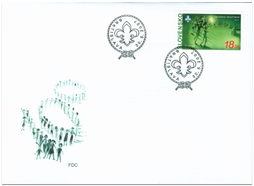