In Roman times the so-called Amber Road, a long and important trading route that started in Roman Aquileia, stretched across the Záhorie region. It crossed barbarian territory near the confluence of the Morava and the Danube. It then followed the line of the Morava, heading north to the Baltic Sea, where large deposits of amber could be found along the coast – a highly valued material for the manufacture of jewellery. To protect Roman traders on their way through the Barbaricum, Romans made efforts to win favour with the local Germanic elites, in particular, through the giving of various gifts. It is then only logical that the graves of barbarian aristocracy were discovered in Zohor and Vysoká pri Morave. The finds included luxurious Roman goods – mainly table services with bronze, silver and glass bowls. The Zohor graves were discovered by accident during work to extract gravel in a local gravel pit. Thus, only incomplete collections of items from the graves have been preserved.  The first grave, containing two bronze pans, was discovered in 1949 during gravel removal. It was only seven years later, in 1956, that the second grave was discovered. Archaeologists only managed to preserve a single large bronze bowl. The following year brought the discovery of another three graves. Graves No. 3 and 4 included glass bowls placed in the graves in pairs. Two pairs of these glass bowls were part of the collection of items that had belonged to the deceased in grave No. 3. The first pair of bowls is made of opaque dark blue glass with Millefiori decoration, while the other pair is made of transparent blue ribbed glass. In grave No. 4 only a single similar bowl made of transparent green glass was found, it is probably half of a pair with the other bowl discovered elsewhere on the site. Interestingly, the richest grave, grave No. 5, whose collection of items was almost complete (a gold bracelet, two silver clips, two silver glasses, six bronze bowls and a pair of bronze scissors) did not include any glass bowls. It was only in 2010 that archaeologists from the Institute of Archaeology of the Slovak Academy of Sciences managed to discover and excavate an untouched grave of a Germanic chief. His belongings that accompanied him to the afterlife included Roman bronze and glass bowls, Germanic clay containers, tools and garments. A set of small stones that are part of a parlour game is one of the most interesting finds. 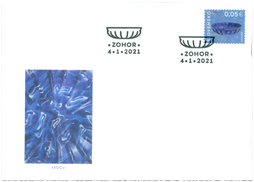 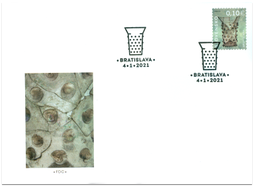 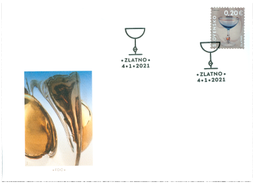