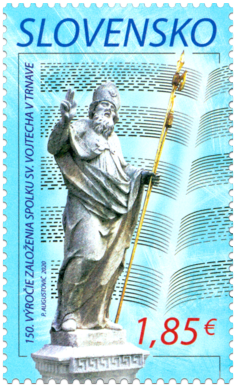 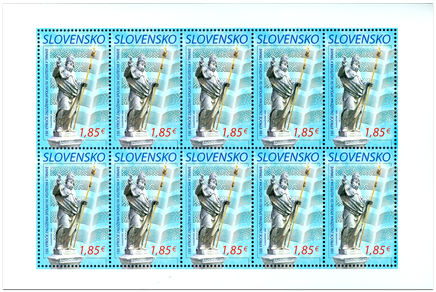 St. Adalbert’s Society (SAS) is the largest and oldest association of Catholics in Slovakia. Over the 150 years of its existence the society has overcome many hardships related to its emergence: oppression due to Magyarization, two world wars, reprisals by the communist regime, as well as obstacles created by the new beginning after 1990.
SAS was officially established at its first general assembly on 14th September 1870. The Catholic priest and linguist Andrej Radlinský was a crucial figure in the birth of the society. His goals included the spread of education, to deepen religious life and to revive the idea of a national identity among the Slovak people. Therefore, one of the first activities of SAS was the publication of  “cheap and good books” for all strata of society. Membership of the society was based on a principle of participation. Every year its members received good-quality literature and the Pútnik svätovojtešský (The St. Adalbertian Pilgrim) calendar for a symbolic fee. The society also published Slovak textbooks and, shortly after its establishment, it began the publication of the Katolícke noviny (The Catholic Newspaper).
Probably one of the greatest hardships suffered by the large family of St. Adalbert was at the hands of the communist regime. In 1953, when the membership of the SAS had reached 250,000 members, the highest ever, the communists forbid membership of the society, limited its publishing activities and transformed it into a "special-purpose facility of the Church". When in 1970 SAS commemorated its 100th anniversary, the celebrations were restricted.
A new era for the SAS began in 1990 with the restoration of its membership and publishing activities. Today, there are more than 85,000 members of SAS in Slovakia and abroad, and the society is a recognised Catholic publishing house that receives domestic and international awards.
On the important occasion of the 150th anniversary of its foundation Slovak Post has issued a postage stamp with the motif of the statue of St. Adalbert from the 19th century located before of St. Nicolaus church in Trnava. Background of a stamps is created by calligraphically rendered open book symbolizing the publishing activities of the SAS. The motif of the FDC is a portrait of Martin Kollár, who was one of the most important representatives of the SAS in the 1870s.
Martina Grochálová 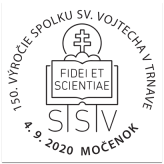 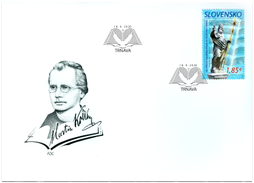 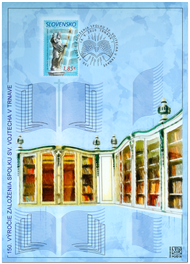 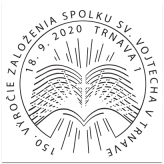 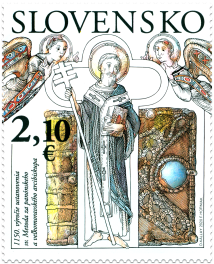 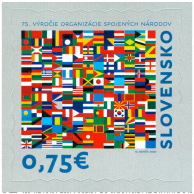