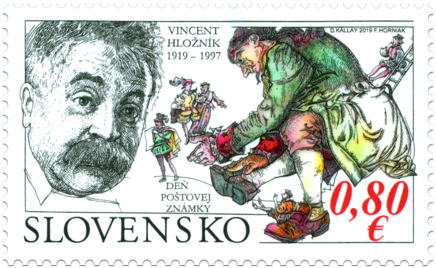 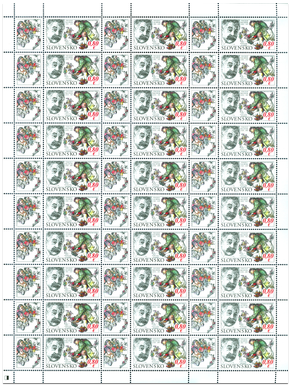 Vincent Hložník’s work is an important part of Slovak modern fine art, making him one of its most significant figures. His creations range from paintings, graphics and drawings to book illustrations and postage stamps. He also designed fine art work for architecture and his sacral work and plethora of stained glass windows should not be overlooked either. His pieces pondering the position of man in the world have always been human, ethical and social in nature, and ultimately led to the author’s tendency to create expressive and figural work.
Vincent Hložník’s postage stamp art naturally evolved into a mastery of graphics. From drawings and compositions it transcended into a completely independent part of the artist’s imagination. Within his stamp work, he mainly focused on serious themes, though he also appreciated the motifs of flowers and butterflies, a series of fauna, folk art and folk clothes. He was an avid creator of works for series, especially from Slovak history, (Devín – Štúr) and the present day, (Slavín, Prešov, Skalica). From this perspective, his stamps and entire artistic work are based on Slovakia and the Slovak people. Stamp issues for the half-century anniversary of Comenius University in Bratislava and the Symphonic Orchestra of the Czechoslovak Broadcast in Bratislava explore novel perspectives. His graphic work on the poetic portrait miniatures of important figures in the Slovak history, (Ľudovít Štúr, Janko Kráľ, J. M. Hurban) is especially insightful. Hložník was truly impressed with the graphics of a postage stamp, particularly the fact that it was the tiniest composition in fine art, with functionality and public interest. At 31, he designed his first stamp based on a construction theme but it was not picked in the competition. In the very same year (1950), he also created a remarkable work – a linocut entitled Crucifixion. Most appealing for him was encountering the beauty of the small, yet perfect, engraving in the design of his first stamp, Academia Istropolitana, a high-quality piece and one of the best rendered visions of Vincent Hložník.
Hložník felt that contemporary Slovak artists in the Czechoslovak Republic ought to pay their debt to the art of stamp creation, though at the time it appeared as if stamps did not exist in the eyes of Slovak artists. There was no relationship to the stamp tradition in Slovakia, though it gradually evolved with the help of Hložník. 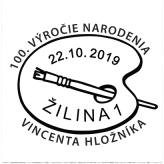 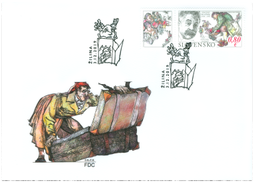 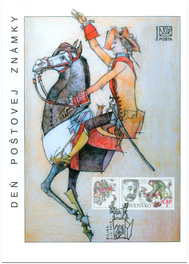 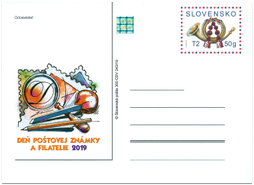 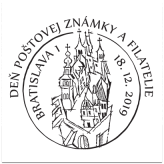