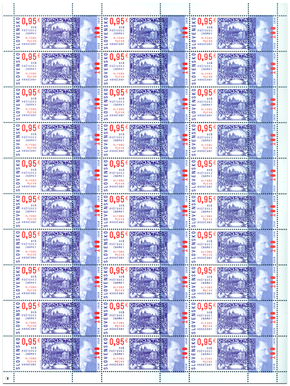 When Alfons Mucha (1860 – 1939) was asked to create the first postage stamps for the Czechoslovak Republic, he was already a significant pioneer and world renowned representative of Art Nouveau. He became famous for his works for the legendary Parisian movie star, Sarah Bernhardt, for whom he created theatre posters, as well as interior and jewellery design for many years. Among his works which are very valuable today is included his life’s work, the magnificent “The Slav Epic” that is comprised of 20 large canvases. Mucha was a patriot and for the young Republic he also created designs for the first banknotes and even for police uniforms free of charge.
The panoramic view of Hradčany was not the only alternative available for the creation of the designs of the first Czechoslovak postage stamps. There is a beautiful design by Mucha with the theme of a girl as the symbol of a liberated country. The theme of a Hussite priest with a cup was not initially accepted for political and religious reasons, but these postage stamps were later issued, as well as those with the theme of a falcon in flight which became the first newspaper stamps, which are no longer in use. When designing the Hradčany theme, Mucha took some “artistic licence” to intervene in the movement of celestial bodies. The rising Sun, a symbol of hope, does not rise over Hradčany, but the artist’s intention was clear.
The artistic works of Alfons Mucha became an inseparable part of Czechoslovak stamp design even through the years of the dual state, and they are still part of it today. Their engraved translation and production using the best available printing technology make them the jewels of any philatelists’ collection, as well as a delight for lovers of the beauty of the art of stamp design. 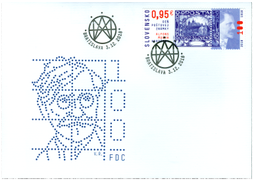 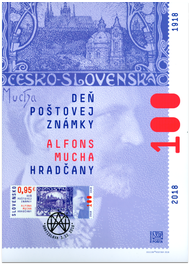