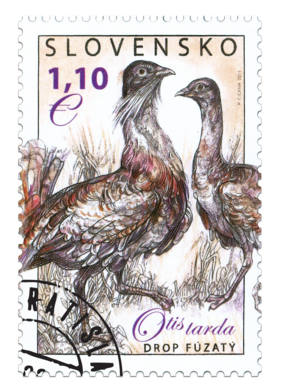 Great Bustard (Otis tarda) is our heaviest flying bird. It grows up to more than one meter with a wing span of up to 2.5 meters and the heaviest individuals can weigh up to 22 kg. This, originally a steppe bird, inhabits our agricultural landscape at an altitude up to 300 m above sea level. It feeds on both plant and animal food and harder seeds to a small degree. The plant food includes, in particular, leaves, buds, and flowers, whole plants of field crops and weeds. The animal food is mainly represented by insects, but occasionally the bird catches smaller vertebrates, for example voles, mice, lizards and even young birds. It nests on the ground, usually in the cereal crop and clover plants. For most of the year, the Great Bustards are concentrated in flocks, which dissipate during the nesting season.
Great Bustard has two subspecies - the European, which lives typically in the area from the Iberian Peninsula and north-western Morocco to Siberia, and the Asian from eastern Altai to Mongolia. Even though the bird lives in an extensive area, it nests in an irregular manner. Nearly 75% of the European population, estimated at 33 000 individuals, lives in the Iberian Peninsula.
Since the mid-70´s, there has been a dramatic decline in their number mainly in Central Europe. The cause of this decline was the intensification of agriculture, building of roads and power supply lines. Of the estimated number of 2 400 individuals around 1900, the number fell to 5 to 10 females in Slovakia in the 90´s of the last century. Since 1994, the bird has been nesting sporadically. After the break lasting a few years, the Great Bustard built its nests again in 2010, also thanks to the efforts of the nature protection and farmers.
Currently, the Great Bustard lives only in the Danube Lowland, where two protected bird areas – Lehnice and Sysľovské polia – were determined for the purpose of its protection. Sysľovské polia near Bratislava are crucial to winterizing of the western Pannonia population, which inhabits the border area of Austria, Slovakia and Hungary. About 400 Great Bustards winterize in this entire area. 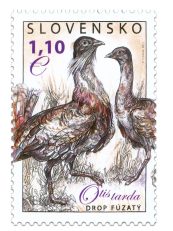 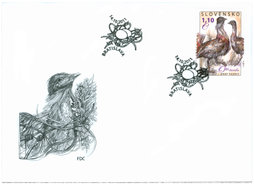 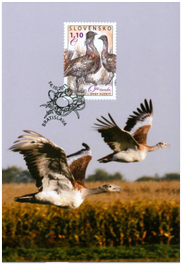 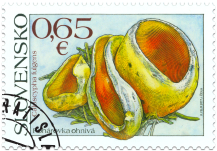 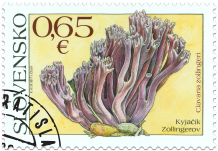