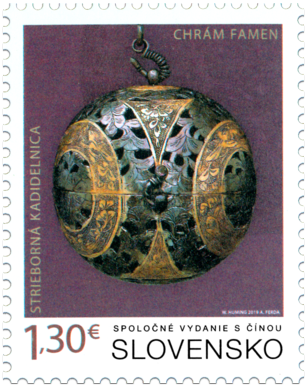 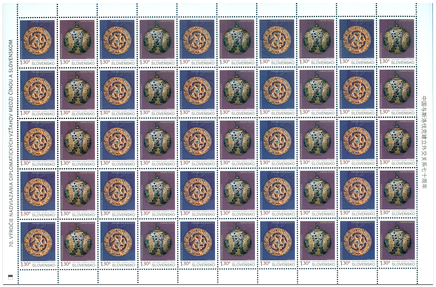 This joint issue of a postage stamp is issued in the occasion of the 70th anniversary of the establishment of diplomatic relations between China and Slovakia. This issue is represented by the most important archaeological findings from the time of the reign of the Tang Dynasty (618 – 907) which is often described as the high point of Chinese civilization and a golden age of cosmopolitan culture. In particular Emperor Xuanzong (712 – 756) could be called the last Turco-Mongol monarch of the Tang ruling house and his reign was the longest of the Tang dynasty.
The emperor also showed remarkable openness and was receptive to foreign cultures which were also imitated by an equally receptive population. That is why various Hu (foreign) fashions and styles became the dominant vogue of the time. Trade on the Silk Road reached its peak with the rise of the Tang Dynasty, introducing spices, heady aromas and a rich, vibrant cultural exchange. An important role was played by the Iranian Sogdian merchants and messengers, who held a privileged position with the Tang emperors who set them up in their own government specific departments to handle matters.
The Tang emperors took pride in being open-minded when it came to religion and showed an interest in many different faiths and belief systems. Buddhism enjoyed a wide following in China during the Tang dynasty. One of the most important Buddhist temples in medieval China was the Famen Temple which was once the place of worship for the Tang rulers. During the Tang era it was known as Chang’an and the name Famen means “a passage to the land of Buddhism”. After the excavation of an underground palace in 1987 a unique treasure was discovered that consisted of four relics which it is claimed are directly related to the Gautama Buddha and thousands of relics of gold and silver Tang art. Among the best-preserved artefacts displayed today in the Famen Temple Museum is a royal silver tea set with several silver-gilded incense burners that are closely linked with Buddhist ceremonies and rituals that were also practiced in the imperial court.
The postage stamp depicts a silver-gilded incense burner of Emperor Xizong (873 – 888) with engraved decorations of plants, flowers and birds. Inside the box are two concentric metal rings and one spice bowl, riveted together in a similar manner to the modern mechanism of gyroscopes. The FDC depicts the Mañjuśrī bodhisattva sitting on a lion from the silver-gilded casket found on Buddha relics. Both artefacts were manufactured using a hammering method which was copied from Persia and the Byzantine Empire. FDC cancellation depicts the coin “Qian Yuan Chong Bao” of the Emperor Suzong  (756 − 762).
Martin Vančo 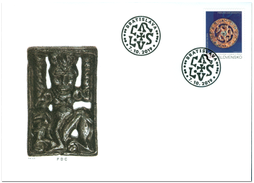 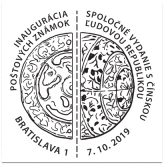 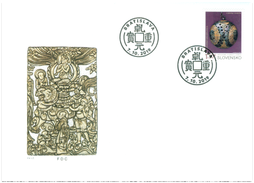 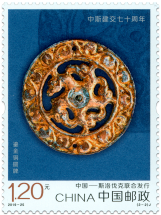 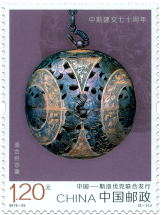 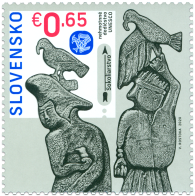 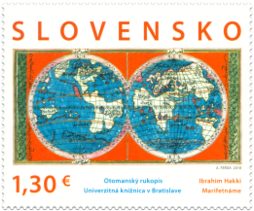 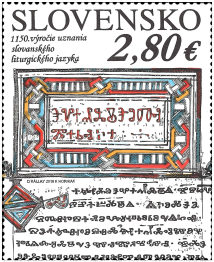