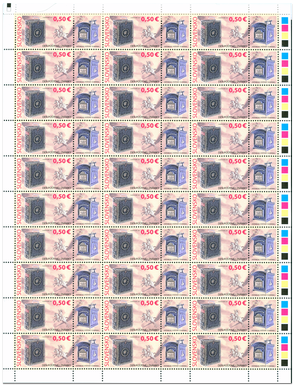 The first written report on the use of the mailbox dates back to 1633 and is from the German Leignitz, where it was placed on the Heynisch tower on the postal route Breslau – Leipzig. In the Habsburg monarchy, the first mailbox was located in Vienna in 1785. In the Kingdom of Hungary, i.e. in the territory of today’s Slovakia, the first mailboxes were used only in 1817 on the basis of a decree issued by the court chamber ordering the regular placement of mailboxes in all post offices with specific hours of their collection.
The oldest preserved mailbox from our territory comes from 1820 and is located in the collection fund of the Museum of Balneology in Piešťany. According to museum director PhDr. V. Krupa, the place of this mailbox is identified in the so-called Frauenfeld plan of Piešťany from 1824, in which the house “To the post trumpet” is marked. The branch of Hlohovec post office was here. In this post office, there was a mobile mailbox made of wood in the shape of a book with a metal holder in the upper part, forming the main motif of the postage stamp. This mailbox had no exact time of its collection. The letters remained here for several days and were waiting for the arrival of the coach, which then took them to the post office in Hlohovec. The coupon of the postage stamp shows the mailbox of the system PARIS in the Art Nouveau version. It was used in Austria-Hungary between 1895 and 1918 and comes from the collections of the Postal Museum in Prague. The background of the postage stamp is completed with the image of riding, showing the postilion with a trumpet, adopted from the woodcut from 1811, in the background of crumpled paper.
Surcharge on the FDC is made up of c. k. the mobile letter collector, showing the image of the postman on a bicycle, prepared on the basis of a model of the Austrian graphic artist from 1890. The motif of the FDC stamp is based on sheet metal, atypical mailbox of the system VRZBA that was used in the territory of Czechoslovakia after 1918. The model of this mailbox also comes from the Postal Museum in Prague, where the most historic three-dimensional objects associated with the history of postal services in the former Czechoslovakia are deposited. 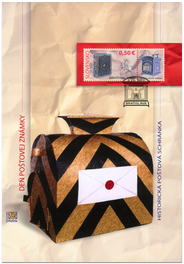 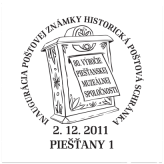 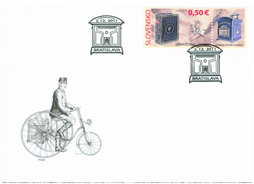